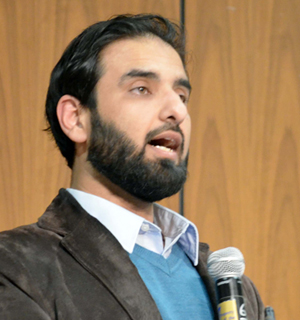 Associate Professor of Philosophy and Religion University of Toledo, Ohio

Ovamir Anjum is Imam Khattab Endowed Chair of Islamic Studies, associate professor in the Department of Philosophy and Religious Studies and affiliated faculty in the Department of History at the University of Toledo. He is an intellectual historian of Islam. His academic interests are united by a common theoretical focus on epistemology, or notions of reason and reasoning, in various domains of Islamic thought, ranging from politics, law, theology, and spirituality (including Sufism). Anjum’s work is interdisciplinary, drawing on the fields of classical Islamic studies, political theory, and cultural anthropology. His recent monograph is Politics, Law and Community in Islamic Thought: The Taymiyyan Moment (Cambridge University Press, 2012), which explores the nexus of politics (siyasa), law (sharia), theology (kalam) in classical Islam, with comparative theoretical interest in Western Thought.

His current research is to bring his historical studies to bear on issues in contemporary Islamic thought and movements. He is researching theoretical developments in the wake of the Arab Uprisings of 2011, and accordingly editing a forthcoming volume tentatively titled “Islam and the Nation State in the Wake of the Arab Uprisings: Traditions, Transitions, and Trajectories.” He is also near-completing a decade-long project to translate a popular Islamic spiritual and theological classic, Madarij al-Salikin (Ranks of Divine Seekers) by Ibn al-Qayyim (d. 1351), which, upon completion, would be the largest single-author English translation of a classical Islamic text.