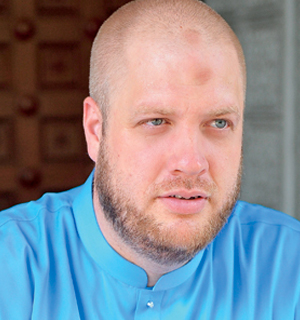 Suhaib Webb is a contemporary American Muslim Imam, thought leader and educator. After his conversion to Islam, Webb left a career in the music industry and pursued his passion in education. He graduated with a Bachelor’s degree in Education from University of Central Oklahoma. After serving as Imam and resident scholar in various communities across the country, Imam Webb enrolled at the world-renowned Al-Azhar University to study Islamic Law.

After years of study in the Arabic Language he was appointed head of the English translation Department at Dar al-Ifta al-Masriyah as a Mufti (Jurist). Imam Webb has completed the memorization of the Quran and holds a number of licenses from traditional scholars in various Islamic sciences. Imam Suhaib Webb strongly advocates for an authentic articulation of the American Muslim identity. He is a proponent of understanding the various challenges facing the American Muslim community and finding solutions based on an authentic American Muslim experience.

In 2010 his website SuhaibWebb.com won the Brass Crescent’s best “Blog of the Year” award. Recently he was part of a delegation that visited Auschwitz to develop better understanding between Muslim and Jewish Americans. He was named by the British Government as a “Moderate Muslim leader” and was named in 2010 as one of the 500 Most Influential Muslims in the World by the Royal Islamic Strategic Studies Center.